Liquid water runs down canyons and crater walls over the summer months on Mars, according to researchers who say the discovery raises the chances of being home to some form of life. 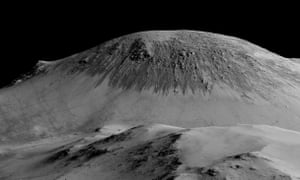 The trickles leave long, dark stains on the Martian terrain that can reach hundreds of metres downhill in the warmer months, before they dry up in the autumn as surface temperatures drop.

Images taken from the Mars orbit show cliffs, and the steep walls of valleys and craters, streaked with summertime flows that in the most active spots combine to form intricate fan-like patterns.

Scientists are unsure where the water comes from, but it may rise up from underground ice or salty aquifers, or condense out of the thin Martian atmosphere.

India’s ISRO does it again with the launch of its first space observatory: Know about this achievement