The Kathua case is getting murkier by the day. Madhu, the daughter of prime accused Sanji Ram, and many other residents of Hiranagar are sitting on a hunger strike demanding a CBI inquiry into the case. What makes the case special is that not the victim but the accused are demanding a CBI inquiry. Their primary concern is that the investigation being carried out by the Special Investigation Team constituted by J&K Police is compromised. This article will compile the apparent shortcomings in the charge-sheet filed by the J&K police based on information currently available in the public domain.

NOTE: The only aim of this article is to ask pertinent questions and encourage discussion. The claims made in the article are not absolute and are based on what is currently known about the case. The article is not meant to indignify the J&K police department and/or push any conspiracy theory. The author has full faith in the country’s judiciary and wants justice for Asifa like everyone else.

The chargesheet claims, “In furtherance of said conspiracy accused Deepak along with his friend Vikram went to Bitu Medical shop at Kottah Morh on 07th of January 2018 evening and purchased one strip of Epitril 0.5 mg containing 10 tablets by showing the prescription of his (Mamu) maternal uncle namely Kamal who had a psychiatric problem and is under treatment with Dr. Mukul at Kathua. Although the medicine as per the prescription was not available with Bitu he gave him Epitril 0.05 mg instead of the medicine written on the prescription.”

None of the brands that sell Epitril (Clonazepam) in India list the 0.05 mg concentration tablets that Bitu sold. Any new information regarding the seller of this specific concentration of the drug would be appreciated.

What evidence links the crime to Devisthan?

One hair strand of Asifa was recovered from the alleged scene of the crime. It is on this piece of evidence that the veracity of the whole case currently rests.

2-“JCL again took out 03 tablets out of the strip which he had kept under a heap of garbage near an electric pole outside the Devisthan and gave the same to the girl and again covered her with mats and dropped the utensil container in front of her in order to hide her. The remaining two tablets were hidden by the juvenile delinquent under a heap of garbage near electric pole. During investigation the said strip containing two tablets was recovered from near the Devisthan…”

The aforementioned tablets (?) on which Asifa was continuously sedated were allegedly kept under a heap of garbage near an electric pole outside the Devisthan. It is from there that the police recovered them. WHAT!!?

Surprisingly, the police charge-sheet discusses no major evidence from forensics or autopsy that could have directly incriminated the accused. According to earlier reports Muhammad Yousuf Pujwala, Asifa’s adoptive father had confirmed – “Her lips were bitten. (potential DNA source!?) There were marks of violence including burns on her thigh and face, and her legs had been broken with some heavy objects”. The charge sheet mentions nothing about the details of her electrocution or about her legs being broken.

The only other piece of forensic evidence that the report discusses is the presence of Asifa’s blood stains on her own clothes. According to the challan even this could not be determined by Forensic Science Laboratory, Srinagar due to technological limitations but was later confirmed using better better technology available at FSL Delhi. In this regard the charge-sheet reads,

“Notwithstanding the fact that accused police officials SI Datta and Tilak Raj had made all efforts to destroy the evidence by washing the clothes worn by the deceased and FSL Srinagar could not frame any opinion on the basis of examination of the washed clothes but to the ill luck of accused the FSL Delhi with updated technology was able to confirm the presence of blood stains on the Frock-Shalwar of the victim which matched with the DNA profile of the victim. DNA profiling also established presence of victim’s blood on the vaginal smears.”

SI Datta and Tilak Raj allegedly took money from the kingpin Sanji Ram “to remove the clay and blood stains/sperm” from Asifa’s clothes. Although the chargesheet talks about finding the victim’s blood on her clothes it misses discussing a very crucial and decisive evidence i.e. the semen stains that could have been obtained from her clothes.

Violation of the crime scene

In this interview the adoptive father of the girl narrates how when he found the body he called the police which arrived with hundreds of media persons. In the following photographs they can be seen trampling all over the crime scene. 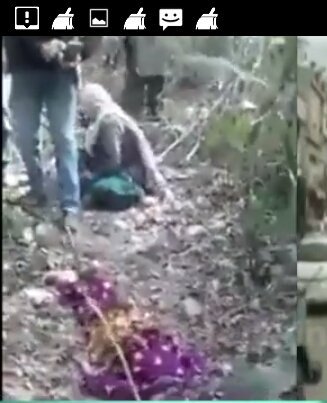 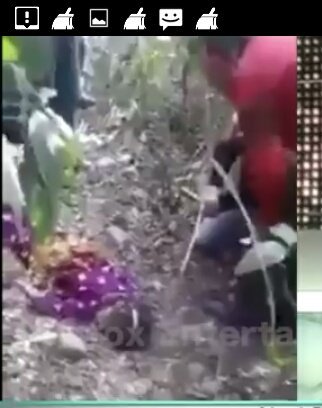 If that was not enough media persons were allowed to handle Asifa’s deadbody. Watch the following video, clearly shot to fuel public anger during the commotion that followed.

What explains these grave transgressions?

Doubts have been raised regarding the alibi that Vishal S/O Sanji Ram and one of the prime accused in the case has provided. He claims he was writing a Biology exam in Meerut during the time of his alleged involvement in the crime. The following proof has been furnished by the accused in his defense.

Regarding this the chargesheet claims, “Vishal Jangotra who is a student of BSc Agriculture at Akansha College Mirapur, UP and actively took part in the rape and murder of the victim, has tried to create an alibi by resorting to manipulation of records and creation of false evidence with the connivance and assistance of his father (Sanji Ram) and one Kishore S/O Prem Nath (his relation) R/O Chanmorian, Hiranagar, R.P Singh, Chairman, Akansha College Mirapur, UP and some other employees of Choudhary Charan Singh University Meerut, who as per the inputs received during investigation have received huge amount as a kick back from the accused Sanji Ram. This aspect needs further investigation as records are to be collected from concerned college/university and in respect of some documents expert opinion from FSL is awaited. Besides, Digital Video Recorder of the Examination Centre where accused claimed to have appeared in examination at Khatoli, Muzaffarnagar has also been seized and has been sent for forensic examination for expert opinion. After conducting further investigation supplementary charge sheet shall follow.“

Only further investigation will clarify these details.

Doubts have also been raised whether Asifa could have been kept in the Devisthan for so long without someone noticing her. Contrary to the assumptions of some people the chargesheet does not mention that Asifa was kept in a “basement” inside the Devisthan, this is logically sound because the Devisthan has only one room with a concrete floor. But the see-through grills make it difficult to believe that the girl could have been raped here for 3 days. If this ground report by Amar Ujala is to be believed, the Devisthan is accessible by three doors. In the sanctum are kept Kula Devatas like Raja Mandleek, Baba Surgal and Baba Kaliveer who are of prime importance to the Dogra community. The three doors of the Devisthan are operated by four keys. Three keys are kept interchangeably by thirteen households of the Rasana village. The 4th key is kept in the nearby Pata village. The Rasana village is home to thirty households. People regularly come to light lamp in the shrine from 6:00 to 10:00 a.m. in the morning and 6:00 to 8:00 p.m. in the evening. It is believed that the Kula Devata shrine must be lit regularly each every day.

None of this is found in the chargesheet which claims, “the victim was kept in captivity at Devisthan which is exclusively manned by accused Sanji Ram to the exclusion of any other person of the area.“

Where the body was found

The same Amar Ujala ground report says, “The place where body of the minor was found connects Sanji Ram’s house to the Devisthan. It can be said that the corpse was found on the way to Sanji Ram’s house. Question is why did the accused throw the corpse on this route, as the track is used by the residents of the area daily? Not just Sanji Ram’s place, this track also connects other houses as a shortcut route.”

Motive of the crime

This is what the chargesheet says regarding what motivated Sanji Ram to do what he did,

“In the course of investigation, it transpired that Sanji Ram S/o Des Raj R/o Rasana was against the settlement of Bakarwals in Rasana Kootah, and Dhamyal area, and always kept on motivating the members of his community of the area not to provide land for grazing or any other kind of assistance. One Harnam Singh s/o Darbara Singh R/o Kootah had sold land to one Bakarwal and he (Sanji Ram) had started acampaign against said Harnam Singh. He also utilized the services of ex- Sarpanch of Kootah and Rasana area against said Harnam Singh and managed to stop the payment on account of installation of telephone towers in his land through the concerned tehsildar on the plea that the land in question was a state land. Ultimately, said Harnam Singh approached the Hon’ble High court and got the impugned order of Tehsildar quashed. He had also seized goats of one Rashid D/o Chandia Bakerwal in the month of December, 2017 for watering his cattle at a pond near his house and Rs. 1000/- was taken from him as fine for releasing the goats. Apart from this he had also charged Rs. 1000/- as fine from Mohd. Yousaf Bakarwal for grazing his cattle inthe forest pasture situated near his house. HC Tilak and SPO Deepak Khajuria were also against the settlement of Bakarwals in Rasana, Kootah and Dhamyal area who had already discussed this issue with Sanji Ram to Chalk out a strategy for dislodging the Bakarwals from the area. They were blaming the Bakarwals on one pretext or the other and used to threaten them. Accused Tilak Raj and Deepak Khajuria also had some serious issues with Bakarwals over the land occupation and crop damage being residents of the same area. Besides, accused Deepak Khajuria had already had few scuffles with Bakarwals. This apart during investigation it transpired that a particular community had a general impression that the Bakarwals indulge in cow slaughter and drug trafficking and that their children were turning into drug addicts.”

Only residents of the area will be able to establish how genuine this hypothesis is. Let us, for once, assume that the current accused are the actual perpetrators of the crime. And that those monsters somehow justified their actions by this line of thought. Even then justice will not be delivered unless rock solid evidence is brought forth. Motives, however genuine, can not be established without forensic evidence of which this case still seems wanting.

More rhetoric and less content is what describes mainstream media today. Asifa’s case has already been heavily politicised. Had media focused on facts alone and kept identity politics out of the mix this issue would never have escalated to its current threshold. Best option now is to focus on bare facts of the matter. Assuring justice for Asifa is the common goal for all sides, Hindu or Muslim, irrespective of ideology or party affiliations.

The People’s Liberation Army (PLA) Is All Smoke & No Fire, Indians Need Not Worry