For the past six decades the ruling Tamil Political class (Be it DMK or AIADMK) has always strived hard to create a wide rift within the minds of the common Tamil population, to establish his/her identity as separate, unique and as per their convenience “DRAVIDIAN” in nature. This identity was purely created to establish a voting pattern during every election and as per this well defined script, people of Tamil Nadu have either chosen either of the major Dravidian parties from 1967 to 2011 leaving aside any space for National parties or the rise of Nationalism for a sense of connect.

The cry for help during the recent Chennai Floods have brought about a revelation in this Dravidian thought process to the locals. Arguably even though we can blame the so called National Media for ignoring Chennai Rains for the past several weeks but again saying that, these Media houses operate based on proximity to Delhi/Mumbai and hardly have any representation elsewhere in our country. But once there has been a call for help from the AIADMK State Government which was debatable to be very late, our Prime Minister Narendra Modi, who had previously allocated an amount of  Rs 940 crores from last week, this week after making a personal visit to assess the situation on ground level has allocated an additional amount of Rs 1000 crores for relief operations. Several NDRF teams have been visiting the State on Center’s orders from last week and this has been further heightened by the visit of Indian Army and Indian Navy this week, who have done a commendable job in reaching out to people in need and they should be rightly considered the real heroes. 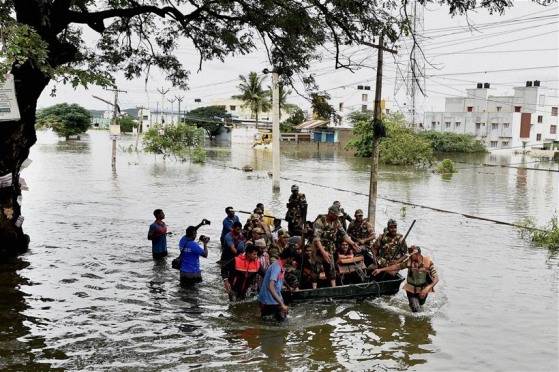 We cannot simply rule out the relief work done by the AIADMK State Government but recent pictures in Social Media, projecting that CM Jayalalitha as Rani Sivagami who saves the child BAHUBALI representing the Tamil population is considered tacky when in ground reality people are actually struggling for basic amenities. AIADMK Ministers also sending pictures of CM Jayalalitha to NGOs pasting them on relief materials have invited wide spread criticism. Funnily the same CM was seen in her local constituency of RK Nagar, two weeks back, delivering a electoral speech with tag lines “Anna Namam Vazhga, MGR Namam Vazhga” (Hail Anna and MGR). What is even more interesting is the the DMK leader Stalin who was campaigning all across the 234 constituencies a month back under “Nammakky Naame” (We for ourselves) is no where to be seen now. 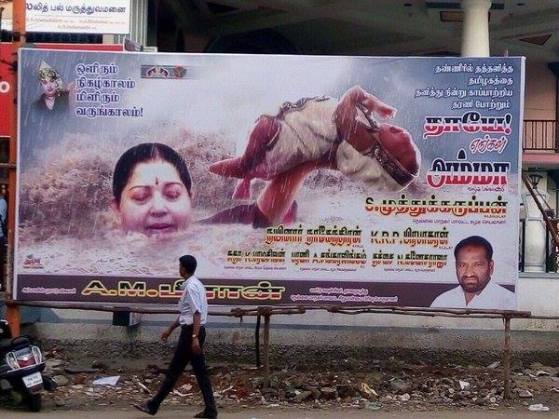 People from all over India once being aware of the situation, have shed their regional/religious identity have poured in help to Chennai and adjacent areas of Kancheepuram, Thiruvallur, Cuddalore and Pondicherry. RSS workers who have been identified by locals as a North Indian Hindu organization and have been compared to ISIS by pseudo secular intellectuals have been actively present at ground level helping people in the most affected areas. Apart from all this, Chennai which is known for its  “Namma Chennai local Samaritans” along with many local celebrities, have been thronging the city and outskirts to reach out to people in need of help.

The Telugu and Kannada film stars together have contributed nearly 50 lakhs inspite of the many linguistic/political issues which was seen developing between the states. The Dravidian parties have often insulted Sri Lankan Cricket players and sent back from Chennai by not allowing them to play in IPL citing Tamil-SL sentiments but Muthiah Muralitharan and Kumara Sangagara have contributed 1 crore and 65 lakhs respectively. Mammootty the Malayalam superstar has opened up his Chennai home for several stranded refugees who have lost their homes.

Do we still as locals, need to keep up our separate identity ? Doesn’t leaving aside the senseless Dravidian identity makes more sense even after countless theorists have proved that the Aryan – Dravidian divide was introduced by British colonialists to divide and conquer India ? It’s still surprising to see that the current political class is thriving on this for its vote bank till now.

Namma Chennai will finally spring back to its own feet this week but we have the whole of India to thank for it and no longer can we consider ourselves as a separate entity.