Snapdeal has decided not to renew Bollywood star Aamir Khan’s contract as brand ambassador of the ecommerce company, two persons with knowledge of the development said. The one-year endorsement deal ends later this month.

“It was extendable by a year but the company decided against it,” said one of the persons. Snapdeal may not replace Khan with another celebrity as it looks to rationalise ad expenditure and focus instead on repeat customers, enhancing categories and trying to 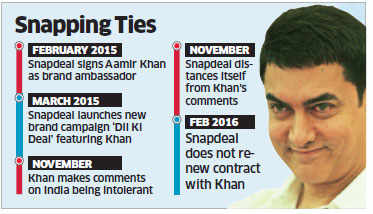 Advertising and marketing executives said the move was linked to Khan’s comments in November about intolerance in the country that led to a storm of protest by supporters of the government and a campaign of denigration against the actor.

Last month the tourism ministry dropped Khan as brand ambassador of the Incredible India campaign that the actor was associated with since 2009. He was replaced by Amitabh Bachchan and Priyanka Chopra.