While Owaisi, Kejriwal and Mulayam are cooking their politics over issues like Beef Eating and Dadri, some people are there in this country who have kept the hope of religious and communal harmony alive. The Sharp Lines drawn between Hindus and Muslims since the lynching of Mohammed Akhlaq in Dadri get blurred in a village near Ludhiana. But that has not stopped Sikh and Hindu community members from helping Muslims repair an old mosque and even have a second storey constructed.

Repair on the mosque started six months ago. Of the Rs 25 lakh invested in the project, around Rs 15 lakh have been contributed by Sikhs and Hindus. They also ferry bricks, cement and sand for the construction. Muslim and Hindu community members also contribute to gurdwara work.The non-Muslims are bearing more than 65% of the expenses of the repair work. 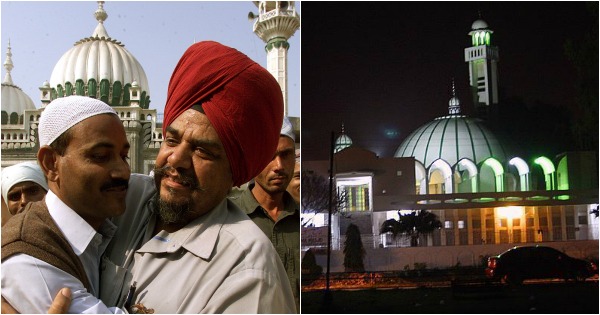 The majority Sikh community takes pride in the village’s communal peace. “Our village is more of a family. If a villager wants to donate money to a religious place he contributes equally to the gurdwara and the mosque. We will continue to uphold this spirit in the future. When we started work on the mosque, every villager pledged to help irrespective of his religion,” says Pyara Singh, block committee member and president of Gurudwara Dharamshalla in the village.

“There may be communal tension in any part of the country but this village has always been peaceful. The villagers have even planned to build a temple,” says said Bir Bhan, a prominent member of the Hindu community. “During our festivals we get utensils from mosque. Also, we celebrate festivals of all communities in including Diwali, Dusshera, Rakhi, Eid and Gurupurab,” says Gurpreet Singh, a youngster from the village.

The Big Question is ” Why are such Stories Not Broadcasted by Indian Media Channels?”. “Is it not the Indian News Channels which are causing tension between two religious groups?” And the biggest question is If So then ” When will we stop watching these Presstitutes?”

What do you think about this? Give your Valuable Views and Opinions in the Comment Box Below:

From Fat to Fit: Story of Sukriti Chakravarty’s victory against obesity and body shaming

Hypocritical to act like a vicious political activist and claim privileges of an artist: Sonal Mansingh on TM Krishna